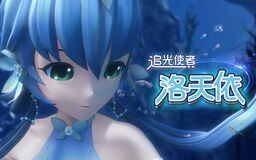 "Light Pursuit" is an original demo song by Lin Maike and Yi Jiayang featuring Luo Tianyi V4. It was first showcased at a Vsinger conference on December 8, 2016. Later, a short version featuring Luo Tianyi and singer Ma Ke was performed in front of a live audience for Hunan TV. In January 2017, the full version of the song was uploaded and only featured Tianyi's vocals.

In July 2019, "Light Pursuit" was accused of plagiarizing the Project Diva PV for Yuuyu-P's "Shinkai Shoujo" by various users on the internet. Shanghai HENIAN Information Technology Co. Ltd. then released a legal document and stated that Shanghai Xin Wei Law Firm would be handling the matters.[1] Shanghai HENIAN noted that they would be looking into the matters and act accordingly.[2]

This song was featured in the Fantasy Wonderland album.

Retrieved from "https://vocaloid.fandom.com/wiki/追光使者_(Zhuī_Guāng_Shǐzhě)?oldid=1096986"
Community content is available under CC-BY-SA unless otherwise noted.