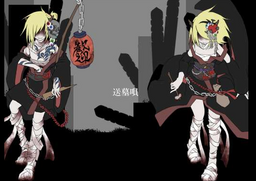 This is Mayuko's most notable work; and her first work to have reached Nico Hall of Fame (exceeding 100,000 views). Most of Mayuko's works involves Japanese folk stories; Hakamairi and Riimakaha are no exception.

There are two point of views in the songs (Rin and Len's point of views), they're against each other, though they speak of only one topic; sending "you" to the grave.

Later on 2011, the song "Hakaokuri no Uta" was used as one of the sample songs for the Kagamines' Appends (using the vocals Rin Sweet & power, and Len serious & power)

This song is featured in the EXIT TUNES compilation album Vocalotwinkle.

Retrieved from "https://vocaloid.fandom.com/wiki/送墓唄_(Hakaokuri_no_Uta)?oldid=1195058"
Community content is available under CC-BY-SA unless otherwise noted.