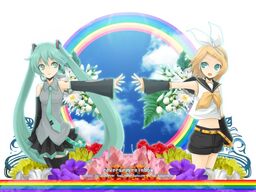 This song was included in the video games Hatsune Miku and Future Stars Project mirai and Hatsune Miku Project mirai 2, which included two alternate versions, sung by Miku and Luka, and Rin and Len respectively. It has reached the Hall of Fame, being sunzriver-P's most notable song.

Costumes for the song, designed by tom, featured in Project mirai.

Retrieved from "https://vocaloid.fandom.com/wiki/逆さまレインボー_(Sakasama_Rainbow)?oldid=1103310"
Community content is available under CC-BY-SA unless otherwise noted.