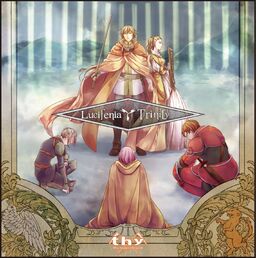 A young girl named Neomaria had her family murdered by a witch, said witch took her as her guinea pig calling her "Prototype N". Turning her into a murder weapon without feelings, she one day makes a caravan disappear on her own. One day she's sent to kill a deserter from Beelzenia by the witch, and Neomaria obeys, and prepares to ambush him from a cliff. However, when she sees him, she becomes enamored with him and falls in love. The shock of feeling something for the first time causes her to loose her footing and fall from the cliff. When she regains consciousness, she's lost all her memories and the deserter seemingly treated her wounds. Recalling "maria" she decides to call herself "Mariam" and is picked up by a group of soldiers, one of them being a spy with the surname Phutapie.

This song is part of the Story of Evil and was released on Lucifenia Trinity.