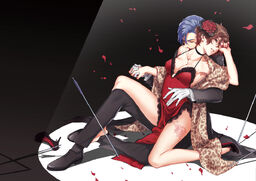 “An intreguing young man clumsily shoots the arrow of [true] love.. Will it piere through the [fiction] of the fickle actress?”
—Author's comment

"Association Actress ~Hunter & Beast~" is an original song by Hitoshizuku-P and Yama△.

A college student (KAITO) encounters an actress (MEIKO) on a bar he visits. He falls in love with her at first sight, but he is inexperienced with love. Despite his fears, he approaches her but is rejected by her, who is known to be a heartbreaker. Despite this the young man, wearing a suit and holding roses in his hands, decided to chase after the actress’ true heart in his naviety.

Despite the serious tone of the song, Hitoshizuku-P described their story to be like a romantic comedy.

This song has entered the Hall of Fame. It is featured in the albums VersuS and Shuffle!!2. The song's themes are "Real" and "Imaginary".