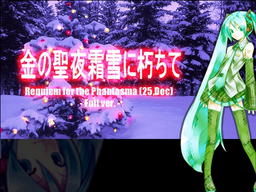 "Kogane no Seiya Sousetsu ni Kuchite" is Deadball-P's ninth original VOCALOID work. It was released before Christmas 2007. Despite the song's cheery Christmas beat, it is about Miku singing a happy-like but somewhat sad requiem to her love who is possibly dead, sick, or far away after being separated from her on Christmas day. In the official English title, A Phantasma is a supernatural being, So it's an another interpretation that on Christmas Day, Miku sings a requiem to the dead.