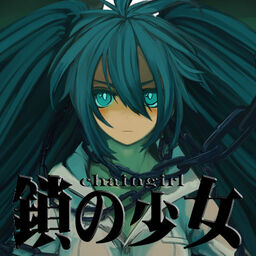 “Hello, I am Noboru↑. This time I tried for a song with a strong theme. Everything in her life was controlled. That kind of girl's.”
—Noboru↑-P

Kusari no Shoujo was uploaded on October 25, 2009, and has reached over 1,000,000 views. The songs talks about a girl that feels trapped and controlled, unloved and that she merely is a trophy or adorn to show off. The person who controls to over the girl isn't specified, but usually it's interpreted as her parents. At the end of the song, the girl resolves to break the "chains" that bind her for finally begin to live by and for herself.

A version with different instrumentals was later uploaded in celebration of the song's 10th year anniversary.

This song was featured in the mobile rhythm game, Hatsune Miku: Dreamy Vocal.