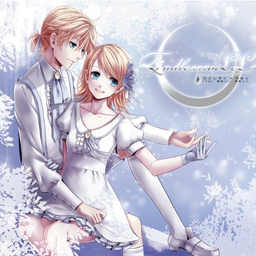 "Kagami no Mahou" is a story about a despised prince (Len) living a miserable life. One day a young man (Gackpo) approaches him asking who's the cause of his misfortune, and offers him a look at his mirror to find out. In it, Len sees a happy girl (Rin) with a fate opposite to his. Drowning in jealousy and hatred, he breaks the mirror and his life resets; he's now a happy and beloved prince. The man comes to him once more, now questioning who the cause of his fortune is. Again, Len looks at his mirror and sees the girl, but now she's the one leading a miserable life. Realizing he was the one who did this to her, his heart is torn by guilt and he wonders how to save her. He then decides that he shall fulfill all of her wishes (implied to be done by ruining his own world so that hers would better) and return her happiness . After her wishes are granted and the mirror breaks, the song ends, with his last line being "if we could meet again someday, that'd be nice".

This song is a prequel to "Mahou no Kagami", and both were released on the album EndlessroLL.