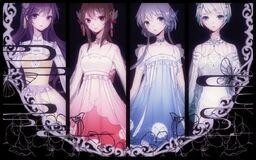 “The flower in the mirror, the water hidden in the flower, the moon's reflection in the water, the mirror-like moon. This is the end of a dream, or perhaps the beginning of a dream.”
—Author's note

"Jìnghuāshuǐyuè" is an original song featuring Xin Hua, Yuezheng Ling, Luo Tianyi, and YANHE. The character outfits in the PV were the winning submissions to Vsinger's Spring and Summer costume design contest for Mo Qingxian, Ling, Tianyi, and YANHE. Xin Hua was used in the song in place of Qingxian for her library had not been released when the song was created, and according to the PV, Qingxian's name was listed in the cast.

The song's background is divided into parts according to Zhuanchanglangren's comments.

“A butterfly, where would it take me to?

All became clear gradually, and as the halation disappeared, I wonder if I was in a world of fantasy.”
—Part I

“"I've never met you before I think. Where do you come from?"

Beside me suddenly appeared a loudly-dressed mature girl with long purple hair, a white face, a tall figure.

"I guess you come from the opposite side of the mirror." She continued, ignoring my surprise, "I am waiting for a person. I'm on this side of the mirror and always see his familiar outline, but I cannot convey my emotion to him. Could you take my message to him?"

"He's my childhood sweetheart, and he left on that day." She touched the mirror, looking at it affectionately. Actually, the mirror per se reflected only the room in which she and I were. "The people in the castle said, he left for the world in the mirror. Although I am alone, I'll stay here, waiting for his return."

"He will someday." I couldn't help but say reassuringly.

"Thank you!" A bitter smile emerged on her face.”
—Part II

“Before eyes appeared a chunk of scarlet, which should only belong to equinox flowers. Striking ears were the cicadas' chirping; filling air was the warmth after the scorching of the burning sun.

"You shouldn't have been here," said a vigorous voice haunting my ears, "This is the post-mortem world, which is too early for you."

Apparently, I was no longer that surprised to the scenery in my eyes. I stared at the girl with brown hair and red eyes silently, who acted with good grace.

She took me to the middle of the flower field. Holding the flowers, she said: "I've been here for thousands of years as a protector of these flowers, whose duty is to look over the equinox flowers' blossom."

"I'm waiting for the end time when I will complete my mission." She picked a flower passingly and handed it to me in both hands, saying wittily: "Well, take this as my present to you. Please go back to your world as soon as possible! I believe that you will return it to me someday."

I gladly accepted the flower. When I was about to say, I don't know from where I come, the butterfly took me to a new spot.”
—Part III

“A beautiful melody came from the flute; as the warm wind blew, a dark-blue lake rippled. I somehow exclaimed: "What a pleasant melody!"

"Do you love the song too?" Said by a lovely and natural girl in a tender voice, "I've been practicing for years, and this is my pièce de résistance!"

She put down her flute and walked to me. As the flute sound disappeared, the sky began to drizzle contiguously, making us feel somewhat sad. She began to stare at the water surface, not caring about my exclamation, and talked about her past. "This was written by a best friend of mine, who, however, sunk into the pool of water and rest under it forever. And this song became my last memory about her,"

"Thank you for listening to my playing the flute. I wish it to be heard by more people." She smiled innocently to me and began to play again. Suddenly, the rain stopped.”
—Part IV

“Well, when I wanted to say something, why, again why, didn't you butterfly allow me a few more words! So I came to a new spot.

Under the silent moonlight, a boy, ah no, a girl with white short hair was looking up to the jade-white moon. It was a night of the full moon.

She looked at me, asking: "Do you love the moon? It is always hung in the sky silently, in every dark night, bringing a peaceful illumination to everyone."

I nodded in favor. Again she looked up and continued to say: "I am a descendant of the wolf family. Here, regardless of the seasons, the moon never wanes. The moon is the source of our family's power. We respect her, watch over her; with her help we know the situation of our family. They began an expedition and will be back soon. We are waiting for the coming feast."

The girl revealed her tusks but hid them again. "Don't be afraid, I am not intending to hurt you. You are a passerby from far away. You must have your family too, and there will be a similar moment for you too."

Hearing that, I returned from panic to normal.

The scene again began to sway, and what came in front of me, however, was the similar and worn ceiling.”
—Part V

“Flowers in the mirror, water hidden in flowers, the moon in the water, the mirror-like appearance of the moon.

The four illusive girls, after all, were just the bubbles of a dream.

In the first place, all of these were a dream.

In the first place, I was that butterfly.