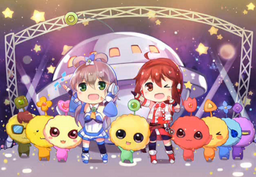 "Chángjiāng 7 Hào Qímiào Shìjiè" is an original Luo Tianyi and Yuezheng Ling duet. It is the theme song for the movie "CJ7: Super Q Team".

In September 2015, this song was featured at the V-master concert held at the Century City New International Convention & Exhibition Center.

One of the promotional images for the song