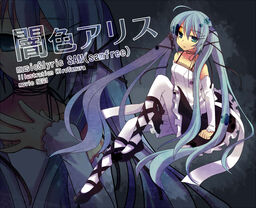 Sam's 18th VOCALOID work, his 4th most viewed song and his first collab with the circle CITRIN. Although the lyrics are rather vague and open to interpretation, they seem to make allusion to the theme of clinging to delusion or to false love. The singer mentions she doesn't mind the hypocrisy; she prefers to continue listening to her loved one until the end, and she won't release her lover's grasp.

A short version of this song was used as a demo for Utatane Piko.