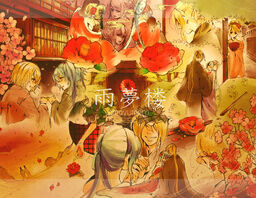 “The fleeting words
"I will come back for you, wait for me"
Although the season has elapsed and cycled, we have become adults,
I am still believing, and waiting―”
—Author's comments

A song about two courtesans, a girl that lived as an orphan (Rin) and the daughter of a former samurai (Miku) in pre-modern Japan. As children, they promised to be together forever, however they are now working in different brothels as rivals. A man (Len) comes along and enters a relationship with them both, going behind their backs and promising both girls that he loves them. But one of them (Rin) discovers the truth and is heartbroken. He then leaves them and promises to return, but the other woman (Miku) grows ill with heartbreak once she realizes her love hasn't returned and dies, leaving her friend all alone. The lonely woman decides to wait for the man to return to free her no matter how long it takes, yet she wishes it all had been a dream.

It has a sequel song telling the events from the man's point of view called Koi Yami Rou.