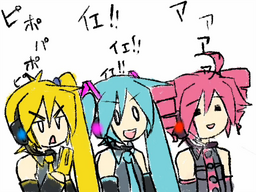 "Triple Baka" is a popular denpa song by LamazeP. He also created the song's PV. The lyrics to "Triple Baka" are somewhat vague, but seem to talk about being "stupid" (a "baka") because you are "creative" and "pumped" and "[Forgetting] about all your obligations and duties". A common interpretation is that Miku has become obsessed with the internet, and doesn't think she has time for anything else; however, the song could also be about LamazeP himself.

After its release, the song proved popular on Nico Nico, and currently has over 775,000 views (entering the Hall of Fame) and numerous derivatives. However, the song's various reprints on YouTube are even more popular; one of them reached over 6,600,000 views before being deleted. "Triple Baka" is often one of the first songs viewed by new VOCALOID fans, and may be part of the reason that Akita Neru and Kasane Teto are commonly believed to be VOCALOIDs. However, Akita Neru is a derivative of Hatsune Miku, and Kasane Teto is an UTAU.

"Triple Baka" is featured on the album EXIT TUNES PRESENTS THE COMPLETE BEST OF Lamaze-P.

Retrieved from "https://vocaloid.fandom.com/wiki/驫麤～とりぷるばか～_(Triple_Baka)?oldid=1102772"
Community content is available under CC-BY-SA unless otherwise noted.