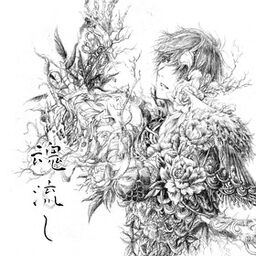 "Soulscour" is an original song made by nyanyannya. It is part of the Lead Princess of the Color Stealing World Series, the Kadoh-Anna-Ruk-a Saga, and is the ending theme for the Funk Beat saga a series of songs that tell stories of the Doctor's (portrayed by KAITO) life.

The song was first only uploaded on Youtube and was the first song nyanyannya uploaded on his official Youtube channel.

It was also featured in the Doctor=Funk Beat album, the second disc of Kadoh-Anna-Ruk=Cyanotype, KAITO's 11th Anniversary KARENT Special compilation album, and its own single.