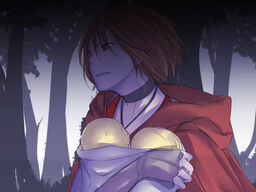 “And people called me "Witch"”

The song follows the life of Meta Salmhofer (MEIKO), never having known her parents, she grows up to become the lover of the murderer Pale Noël (Kiyoteru) and joins his criminal organization, Apocalypse. Later on, when Apocalypse caused another riot, she encounters a blood-stained Eve Moonlit (Miku) and becomes distracted by her cries for her children, long enough to be captured and bound in chains. Sentenced to death for her crimes, she was then saved by Seth Twiright (Kiyoteru) who offered her freedom if she agrees to be his guinea pig for "Project 'Ma'", to which she agrees. Through "God's seed", she brought the twins Hänsel and Gretel into the world, she then recalls and remembers that she was born just like them, a "Ghoul Child". She decides that she won't let her babies be experimented on and kidnaps them, fleeing into the woods. A year passes and Meta is happy with her babies and decides to take them out for a walk in Held's forest and leaves them for a moment, but she then comes back to find that they've disappeared.