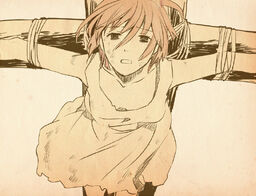 "Witch" is an original song by Suzuki-P and Ryotai. It is Suzuki-P's best-known work. Despite that fact that it features other Vocaloids, it is marked as a Luka original song.

This tragic story is narrated by Lane and Lean (Len and Rin respectively). A young woman, Lucca (Luka) and a prince, Cougar (Gackpo) fell in love. A witch hunter named Michelle (Miku) who sees the couple together grows jealous, as she has harbored her love for Cougar for a long time. Michelle then accuses Lucca of witchcraft and has her sentenced to death. The town burns Lucca at the stake, with Cougar cutting her long hair and tying her to the stake. Lucca begins to cry and reflects on the time when she and Cougar were happy together. She then reveals that she is indeed a witch as she grows black wings and breaks free of the rope tied around her, flying off into the night.

This song has entered the Hall of Fame. It is featured in the albums Vocalocluster and DEBUTANTE5.

Its novelization was released on November 27, 2014.

The novel adaption was released on 27 November, 2014. The story tells of Lucca trying to hide her magic from the town she lives in after Lean and Lane tell her that witches have been killed.

A doujin titled Majo ~Side M~ was released by batako, but seems to have no connection to canon.

Cover of the Witch Hunt novel.

Retrieved from "https://vocaloid.fandom.com/wiki/%E9%AD%94%E5%A5%B3_(Majo)?oldid=1067516"
Community content is available under CC-BY-SA unless otherwise noted.