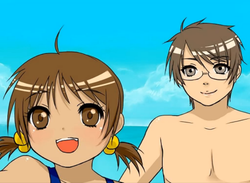 "Kuroi Taiyou" is a song featuring Hiyama Kiyoteru and Kaa Yuki by PressureRain. This first version of the song was uploaded on August 21, 2010. Their previous channels being suspended has resulted in much of their older works being deleted. It was later on November 18, 2013 that they returned and remade the song using the same vocals.

There is a subpage available. Arranged by order of release.