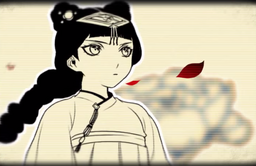 “Arirang - the traditional Korean folk song title. You might have listen this song when Kim Yuna, the olympic champion of figure skate showed a performance with the song, "Hommage Korea". You can also listen the original Arirang if you search YouTube. Actually, the traditional Arirang is kind of a sad song with biggest sorrow, but I made this song different. Just have listen and enjoy it.”
—Author's comment

"Arirang" is a remix featuring SeeU.

This song was featured in the iOS rhythm game app, Krazy Rain 2 Battle.

Retrieved from "https://vocaloid.fandom.com/wiki/%EC%95%84%EB%A6%AC%EB%9E%91_(Arirang)?oldid=976860"
Community content is available under CC-BY-SA unless otherwise noted.