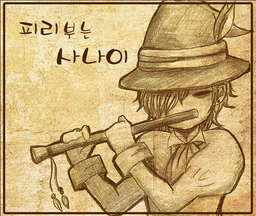 "Piribuneun Sanai" is one of SeeU's original songs. This song is the first part in a series made by Team PCP. The story of the song is about two children who lived happily in a small town, loving one another with pure hearts. Both had no parents, so they relied on each other. One day, she was accused of being a witch and condemned to the stake. The day of her burning ceremony, he cried out in the crowd, calling her name miserably. She smiled at him until the very last moment.

After losing her, he became a man with a dark personality. He visited a witch to trade his precious memories for magical power. (However, the memories were already engraved in his mind, so they were never removed). With his new power, he went to the town and took revenge on the village people. Their children, the most important people for them, were taken away by sound of his flute. He and the children disappeared and never returned again.