"*Hello, Planet." is a song featuring Hatsune Miku by sasakure.UK. It is the fourth song in the Doomsday Series.

The PV simulates a video game and is similar to "Nijiiro*Adventure", another sasakure.UK song. The art was made mostly in Microsoft Paint.[1] A melody from the classic composer Johann Sebastian Bach is present throughout the song.

In the Project DIVA Extend PV, the scene of Miku being led by her master was created from a motion capture where sasakure.UK himself played the role of Miku's master.[2][3]

The tetraphonic ringtone sound of the opening of the 2019 edition is a homage to sasakure.UK's origins as a songwriter.[4] 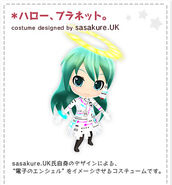