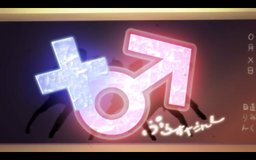 “Delivering you a shot from my "pink stick"...(u_u)”
—Author's comments

"＋♂" is an original song by Giga-P. The video's title lists "Kagamine Len-kun feat. the Girls" as the singers. This song can be viewed as the spiritual successor to "Gigantic O.T.N" in terms of style.

This song is about a teenage boy (Len), in the peak of puberty and with his hormones wreaking havoc. As he feels more and more attracted to his female classmates, the guy finds it impossible to concentrate on school, control his urges, or avoid acting like a pervert, much to the girls' dismay.

This song has entered the Hall of Legend. It is featured in the album Vocalospace.

Retrieved from "https://vocaloid.fandom.com/wiki/%EF%BC%8B%E2%99%82?oldid=1029043"
Community content is available under CC-BY-SA unless otherwise noted.