*Luna is a duo of Japanese music producers, which consists of one female (Rua, るあ) and one male (Nami, なみ).[1]

Debuting since early 2012, their popularity was steadily on the rise, though it was not until 2015 that the duo made a major breakthrough with 嫉妬心 (Shittoshin). Their music can be seen as vivid, light-hearted and joyful, frequently associated with the aesthetics of summer.

They are also the creators of the "Nouryokusha Series" (能力者シリーズ). 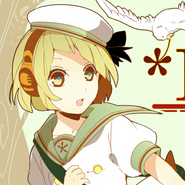