"1/6 -out of the gravity-" is a song featuring Hatsune Miku by Vocaliod-P, and the song uploaded to YouTube on December 1st, 2020 at 12:00 AM JST. It is the best-known work of the producer. They wrote the song for a person he knew who had much sadness and bitterness in her life. In an interview with MIKUBOOK, Vocaliod-P stated,

“"She" always suffered from something and had deep sorrows and bitterness in life. I thought that I wanted to help her somehow. The gravity on the moon is one-sixth of that on the earth. If we could go to the moon, our body would become lighter. Then I thought her sorrow would become one-sixth of that she has.
In Japan, there is a red tower called "Tokyo Tower". I took her there and went up Tokyo Tower because I thought the bitterness would be eased even if we couldn't go to the moon. I mean, I wanted to make her bitterness lighter.”
—Vocaliod-P interview with MIKUBOOK[1]

He also stated that he was aware that it was only a "childish trick", but felt that through the song he could state his good intentions.

"I cried cried so much"
How can I set you sinking into the darkness?

Performed to have running to you
from all the way

Please could you give me?

The moon is shining white
with the help of sun power

Please you depend on me the same as her?

out of the gravity

Kaitsuko-P's Cover with Rin and Len

Miku's costume for the song "1/6 -out of the gravity-", designed by Tariou, featured in Project mirai 2.

Miku's costume for the song "1/6 -out of the gravity-", designed by Tariou, featured in Project Diva Arcade Future Tone. 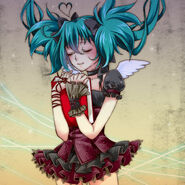 Official Song box of "1/6 -out of the gravity-" for -Project DIVA- series.