"Room 13943" is an original song by SCL Project. It is the first song to feature VanaN'Ice (Len, Gackpo, and KAITO) with other Vocaloids who actually sing. It's also natsuP's first work with Kiyoteru, who is credited as XXXX.

The premise of the song takes place in a jail cell. The lyrics are rather vague, but it can be interpreted that the cell guard was originally friends with the prisoners but locked them in jail after lying, cheating, and murdering. It can also be suggested that they are at odds with each other, none of the characters truly trusting each other. Throughout the song, heavy breathing and distorted voices play in the background, the intensity and volume of both increasing as the song goes on. In addition, the PV itself has clouds of blood throughout the song, with images of bloodied walls and doors showing briefly at the beginning.

The ending of the song—who murders the male prisoners and what happened to the female prisoner and Kiyoteru—is left to the viewer's imagination.

This song is featured in the album LAST COLOR. 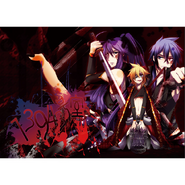