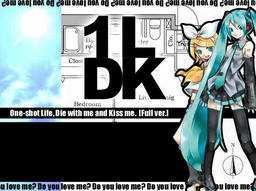 1LDK is an original song by Deadball-P sung by Hatsune Miku. It is a song about two girls (Miku and Rin) are in a Yuri relationship, and the song talks about their everyday life as a lesbian couple. This songs is notable for Deadball-P's love of Yuri (Girls' Love). It is featured on the albums Dead Ball Project vol.2 and EXIT TUNES PRESENTS THE VERY BEST OF Deadball-P loves Hatsune Miku (デッドボールP loves 初音ミク)

This song was featured in the following compilation albums.

Retrieved from "https://vocaloid.fandom.com/wiki/1LDK?oldid=1005317"
Community content is available under CC-BY-SA unless otherwise noted.