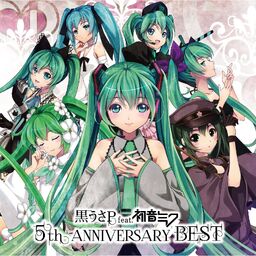 5th ANNIVERSARY BEST is a compilation album by Kurousa-P made to celebrate 5 years of his Vocaloid career. The album includes producer's best known hits such as "Senbonzakura", "ACUTE", "Cantarella" and also some new songs. The album is available to buy in three versions, a normal version and a version with an additional disc (either DVD or Blu-ray) that contains music videos to some of the songs. Tracks 2, 3 and 6 are tagged as the 5th ANNIVERSARY ver. Track 17 is a bonus track. The album ranked number 29 in the Oricon Weekly Sales chart its first week of sales.

The first disc tracks (1 to 17) are included in all editions, the tracks of the second disc are video clips included in the versions including the DVD or the Blu-Ray disc.

Retrieved from "https://vocaloid.fandom.com/wiki/5th_ANNIVERSARY_BEST?oldid=1173607"
Community content is available under CC-BY-SA unless otherwise noted.