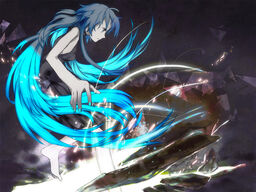 "6" is an original song by AVTechNO! featuring Hatsune Miku. It is the parallel song of 9, another work by AVTechNO! sung by Megurine Luka. While both songs are similar in terms of composition, 6 consists of more electro elements.

The lyrics is taken from the prospective of "a naughty person", and his view of everyday life.

Since its release, this song has received three remixes by the producer.

Retrieved from "https://vocaloid.fandom.com/wiki/6?oldid=1000016"
Community content is available under CC-BY-SA unless otherwise noted.