During VesFes 2011, there was a fan competition to illustrate a mascot for the VY1 and VY2 software as a method of perceiving how the fandom thought of VY1 and VY2. Manbou No Ane won for VY2 with Roro while Rimiko won for VY1. These mascots were later refined for an illustration book. While they are being used promotionally it is to be noted that these winning mascots are not official designs for the VY software.

Since then, Roro has been illustrated in many PVs for VY2, most notably done by Tsukasa Ryugu herself. Numerous fanart has also been made of Roro. 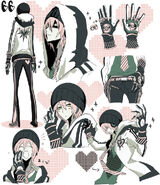 Vol.4 of the VOCALOID-P data series featuring a Roro cosplayer