"86" is an original Filipino song by Dasu featuring GUMI and Kagamine Len. Dasu describes the plot in this song as "your cliche damsel-in-distress story but it's a trap who wants you dead". Theories have sprung up regarding as to what the song is all about, but the most common story is that it is about Hira (the blue-haired boy) who rescues August (the blonde-haired girl) in which both of them became lovers. However, August soon reveals her true colors to Hira: she is actually a boy who deceived Hira all along and whose true intentions are to put him to harm. Shio (the red-haired boy) also appears in the video but it is unknown as to what his role in the video is.

(This definition is shown at 2:29, possibly referencing to August's acts.)

This song was released as a single. 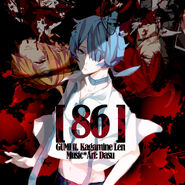 Cover art of the song

Retrieved from "https://vocaloid.fandom.com/wiki/86?oldid=1031054"
Community content is available under CC-BY-SA unless otherwise noted.