"8HIT" is an original song by Wonderful☆Opportunity. It was uploaded to YouTube on December 19, 2017. It features Rin talking about physical strength and preparation, and Len talking about mental strength and strategies. This song is well received, and many "exercise" / "action" PV derivatives and utaite covers were made from it.

This song has entered the Hall of Fame. It was licensed as a single by Karen-T with the same name. 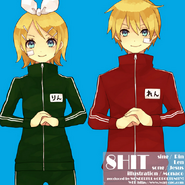