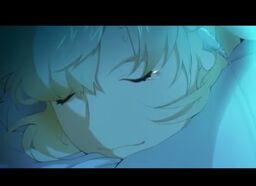 "A.I" is a song featuring SeeU and Sweet ANN by Springhead. It is the story of a robot that has lost her memory of the past. Slowly, she begins to recover her memories from the time of her creation, and recalls the one person who truly loved her; her creator. When she realizes he is no longer alive and she is alone, she begins to cry and experience emotion, something that she thought she could not do because she was only a robot.

Gradually her artificial intelligence begins to return and she gains consciousness. She becomes more like a person, experiencing more emotion. But the sadness of her losing her master and the memories the two shared overload her system. She smiles for the last time before her system crashes and she dies. The last thing she thinks before her death is, "I am alive".

The English version of the song was created using Sweet ANN's VOCALOID voicebank, but was edited so that she sounded very similar to SeeU. It is the first and only time Springhead used Sweet ANN as an English form of SeeU.

Below is an official English translation: via Producer's approval. Amendments may have been made to the original translation. —by Rua

Without any thoughts,
Without any doubts
I endlessly walk through the days of silence

I sat down and
Recalled
The emotion

Perhaps my head
Is messed up, broken
But someone gently whisper

That it means "I am alive"

Retrieved from "https://vocaloid.fandom.com/wiki/A.I?oldid=1068245"
Community content is available under CC-BY-SA unless otherwise noted.