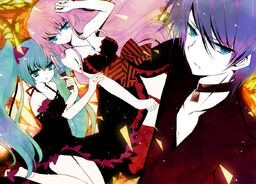 ACUTE and its sequel ReACT, are about about a series of love triangles that involve the five protagonists.

The song talks about a love triangle between KAITO, Miku & Luka.The two girls fell in love with KAITO, but they both made a promise to not confess their feelings to him. However, Luka and KAITO fell in love and started a relationship behind Miku's back. Miku later found out about it by coincidence, being afraid that she will be left behind, and feeling betrayed, she went to KAITO's home and confessed her feelings about the situation, telling him that she is afraid that she will be left alone and that she at least wants KAITO to hold her the way he holds Luka. KAITO felt sorry for her and did as she wished for that night.

After the events that occurred last night, Miku felt that KAITO truly loved her and that Luka had brainwashed him so that he will love her and not Miku. Miku wanting to "fix" everything and let to KAITO be free, she decided that she will pretend to be engaged to KAITO without his knowledge.

The couple (Luka and KAITO) notice that Miku began to act strange. Along with remembering events that never happened, like KAITO getting her an engagement ring, one of the weird changes in Miku's behavior was that she didn't seem to care about cute things like she used to, but instead liked and felt safe when near knifes.

KAITO, feeling guilty about the situation, called Luka to his house and told her that he embraced Miku. Luka was shocked but understood that KAITO wasn't the one to blame. Though she still felt responsible for Miku's sudden change. Right after that, Miku called Luka to find out where she was. Luka, knowing Miku's situation, was hesitant to answer but Miku told her that she shouldn't act like that in front of KAITO because she could worry him. She then asked her why are they together without her. Luka felt even more guilty and started to cry when KAITO suddenly embraced her, causing her to drop her phone. As he held her, he took the blame for Miku's behavior. KAITO and Luka eventually decide to help Miku return to the way she was before.

Miku, feeling betrayed, grabs a knife and goes to KAITO's house where Luka was staying. She tells Luka that if she continues to see KAITO, everyone would hate her and that Miku herself would have to take some actions. KAITO tried to tell Miku that it's him to blame. That despite the fact that he knew he shouldn't have chosen either of them, he needed Luka to be beside him and that all of Miku's hatred should be directed at him. In a fit of rage, Miku attempts to stab Luka but KAITO, who recalled his father stabbing his family to death with KAITO being the only one to survive, took the blow with his last words being "I love you," which were also his fathers last words.

Realizing what she had done, Miku tells Luka that she was going take everything she loved, stabbing herself immediately afterward. Not wanting to lose the only people she ever cared about, Luka calls an ambulance, saving both KAITO and Miku.

After Miku wakes up in the hospital, both girls apologized to each other while KAITO waited outside of the room in a wheel chair, wishing for both of them to be happy.

The song starts with the ACUTE's melody in piano along some scenes of the previous PV. The songs starts, showing Miku in a hospital. She survived her attempt of suicide and is in recovery after the incident. There she meets Len. Len attempts to help her, but to no avail. Miku is already aware of the relationship between Rin and Len and does not wish for history to repeat itself. Her memories of ACUTE haunt her and she is still wearing the ring that KAITO gave her. Rin, at first, believed that eventually the situation would be resolved quickly. However, the more Len's involvement of trying to help Miku lingers, the more Rin becomes impatient and jealous.

Miku is incapable of freeing herself from the past as she still has an attachment to Luka and she is still in love with KAITO (wearing her engagement ring as proof). She does not know how to smile anymore and she does not accept Len's help because she does not want any more people involved. On the other hand Rin is about to repeat the same mistake that Miku made in ACUTE in order to get Len to notice her, suicide. In a final confrontation between Len and Miku on the hospital's roof, Miku glimpses Rin approaching with a knife in her hands, confirming her suspicions. Seeing that the story is repeating again Miku finally reveals what happened in ACUTE. She tells Rin not to make the same mistake she did. Then Rin hugs Miku crying, and Miku for the first time smiles in the whole PV. Finally the PV's end shows KAITO in a wheelchair along with Luka, confirming that he was attacked by Miku and survived too, but because of being traumatized for so long, Miku now believes that she has nowhere to go, and she can never love anyone again. Also, the PV shows Rin and Len together in the end as well leaving ReAct in a seemingly "happy ending."

All tracks written by Kurousa-P. With PVs by Ichiyou Moka.

ACUTE and ReAct were featured in the following albums:

ACUTE and ReAct were featured in the following compilation albums:

ACUTE was featured in the following video games:

Promotional artwork for the song ACUTE.

Promotional artwork for the novel ACUTE.

Promotional artwork for the novel ReAct.

Retrieved from "https://vocaloid.fandom.com/wiki/ACUTE_/_ReAct?oldid=935824"
Community content is available under CC-BY-SA unless otherwise noted.