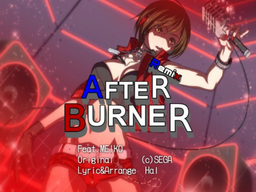 "AFTER BURNER" is a vocal remix featuring MEIKO by Hal. Originally composed by Hiroshi Kawaguchi from the 1987 arcade game of the same name, also produced by SEGA.

Below is an unofficial English translation: via Project DIVA. Amendments may have been made to the original translation. —Featured in Hatsune Miku -Project DIVA- Arcade, the writer is uncredited.

Well, take off, To the other side of the far-off sea.
Shooting down is the destiny which dyes the sky bloody red.
Sparkling body and wing are worn on the body.
feelings are conveyed.
fly away

Thousands of enemies aim at my heart.
Evade it by 360 degree turn if danger approaches.
Vow echoes in my heart
I promise I will tell you my feelings

I pass through the valley.
I run through the sea, ground, sky.
Then, I am supplied soon.
Engine full power! After Burner On!

There is no end in the siege.
If I missed, it becomes defeat with that in the end.
I decide a preparation, Now
Break the sound barrier, create a sonic boom.

Then, thousands of enemies prevent a way.
Evade it by 360 degree turn if danger approaches.
Always defend the oath.
I promise I will tell you my feelings

BB Operator module for the song "AFTER BURNER", designed by SEGA. From the video game Hatsune Miku -Project DIVA- Arcade.

Retrieved from "https://vocaloid.fandom.com/wiki/AFTER_BURNER?oldid=1024538"
Community content is available under CC-BY-SA unless otherwise noted.