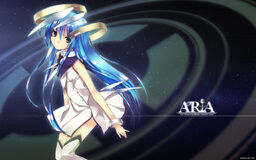 The person depicted in the PV is not Miku. Her name is ARiA, a character made by the members who produced the work. The wearable supercomputer she uses is also called ARiA, in this case it's short for "Autonomous Reactive integral Attribute".[1]

Ariane-5 Rocket
Add a photo to this gallery

Retrieved from "https://vocaloid.fandom.com/wiki/ARiA?oldid=626218"
Community content is available under CC-BY-SA unless otherwise noted.