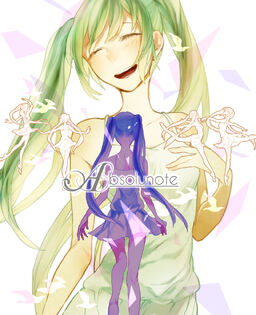 "Absolunote" is a song featuring Hatsune Miku by Lemm. According to Lemm, the song was made using Miku Append Dark, based on the image of the utaite 000 whom he liked.

The hook of the song is "sha ru din lan", heard at the beginning, middle, and end of the song.

While the song's meaning is not known, the pv appears to depict Miku as a ballerina, specifically a music box ballerina (as seen at the beginning and end of the pv before the song's title is shown). This is particularly notable where images of Miku dancing gracefully like a ballerina flash across the screen during the second hook of "sha ru din lan".

Retrieved from "https://vocaloid.fandom.com/wiki/Absolunote?oldid=1046699"
Community content is available under CC-BY-SA unless otherwise noted.