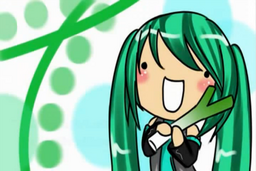 “This song is about Miku's addiction to something. I bet you can't guess what that is! ;D”
—Circus-P, video description

"Addicted" is a punchy electronic song by Circus-P, sung by Hatsune Miku's original VOCALOID2 voicebank. Presumably, she is addicted to her negi. The original upload has been deleted from Niconico, although it still survives on Piapro. A demo version, uploaded on October 9, 2010, no longer appears to exist anywhere on the internet.

A revised version of "Addicted", with completely revised lyrics but obvious resemblance to the original version, was released on the album FIVE on April 11, 2014. An official PV was uploaded onto YouTube and Niconico on May 26, 2014, and was ranked in the #12 spot in the 348th edition of the Weekly VOCALOID Ranking.[1]

Retrieved from "https://vocaloid.fandom.com/wiki/Addicted?oldid=993759"
Community content is available under CC-BY-SA unless otherwise noted.