Akita Neru (亞北ネル) is an officially recognized derivative. The term "Derivative" is used here to describe a fanmade VOCALOID character that is based on an already existing character.

On October 14 of 2007, when the Miku-movement was on the rise beyond expectations, a Japanese TV station suddenly broadcasted a program that stereotyped Miku users as "anime freaks without stable work experience". Three days later Miku's pictures became unsearchable on main search engines such as Google and Yahoo! Japan, and in the following two days, Miku's article was deleted from the Japanese Wikipedia.

This news became widespread or "flamed up" (炎上した) on 2ch bulletin boards with the rumor that an advertising agency which had a strong influence in the Japanese music industry was behind the series of "anti-Miku negative campaign" in an attempt to purge Miku and indie musicians from the music trend. Then numerous comments were posted which denied the rumor or "put off the fire" (消火する) followed by the phrases "飽きた、寝る。" (Got bored. Going to bed.) or "寝る、お前らも寝ろよ。" (Gonna go to bed; you should too.). Yet those comments drew nothing but negative responses from 2ch netizens. The contributors were branded as "puppets of the agency". The netizens joked about the "puppets" and made a spoof character for these posts as "Akita Neru".

Google and Yahoo! Japan announced that the search failure was a technical problem and had nothing to do with the advertising agency or the TV program. The Wikipedia page removal was the result of copyright violation, which also had no relation to the agency.[1] Still the rumor about the "Miku-hating agency" persists within the Japanese fandom presently.

On April 1, 2008, Crypton adopted Neru as an official derivative character of Miku.[2] 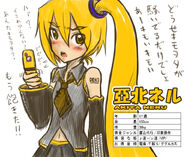 Smith Hioka, an illustrator, finalized the concept art of Neru and she came to represent the tsundere culture of VOCALOID.

Neru officially has no defined voice, however this has not prevented users from attempting to give her one. In some cases Neru has the voice of a boyish-sounding girl, while some people have assigned her to Miku's default voice, but in a higher octave. Although people use the higher pitched voices as a representation of Neru, her voice has been portrayed in -Project DIVA- 2nd as being a lowered version of Miku. Another suggestion also uses Rin. This was first used in Nanameue-P's HONEY PV, Neru has a singing voice that better matches her aesthetics.

She is regarded as a "BOUKALOID" (in Japanese, 防火ロイド or 防火LOID) - a play on words. It literally means Fireproof-loid and has the same pronunciation as VOCALOID in Japanese.

Neru's design is similar to that of Hatsune Miku. She has yellow hair consisting of an odd length of short and long, the long hair is styled into a left side-ponytail held by a blue futuristic ribbon. This does not need to physically touch Neru's hair to keep it in place. She has a stray hair at the top of her head and nose length bangs, her eyebrows are thick and her eyes are tsurime (upward-pointing) eyelids/eyelashes. On her left upper arm is the red mark "DEN2", its significance is currently unexplained and said to stand for the "anti-Miku advertising agency", rumored to be a supposedly-powerful entity in the music industry of Japan. Due to this, details were intentionally withheld for the safety of Neru's creator.

Her top is grey in color and sleeveless with a yellow hem, below her yellow necktie is a triangular cut that shows her navel and the back has two circular holes. The rest of her attire is black with yellow trim. She wears detached sleeves, a pleated skirt with bike shorts and thigh boots. On her left thigh is a garter purse that holds a yellow clamshell cellphone which is presumed to be a Motorola V3X.

Due to Neru proving to be one of the more popular Fanmades, appearances of her have warranted some consideration for promotion. The other derivatives bearing this distinction are Hachune Miku, Sakine Meiko, Yowane Haku, and Tako Luka.

Official licensed Neru figurines have been produced: a Nendoroid Puchi and a 1/8 scale model.

In Maker Hikoushiki Hatsune Mix, Neru makes a cameo appearance as a music teacher and as a salesperson. She appears in chapter 6 and chapter 7.

In the rhythm game, Hatsune Miku -Project DIVA- (series), Neru is an available character. Her appearance in the first -Project DIVA- game did not carry her "official" personality, and was as cheerful as Miku. This was corrected in -Project DIVA- 2nd, complete with tantrum-throwing if the player has not chosen her for a long time. 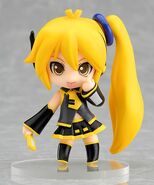