For other uses, see Alice (disambiguation). 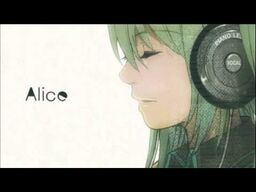 “If you hear a sigh in this song, it means you have an experience which had passed your own happy summer.”
—Author's comments

A song about a boy who loves and watches over a girl who doesn't love him back. The song focuses on their friendship and the unspoken love from the boy to the girl. Furukawa-P created the song to speak universally to everyone that has fallen in love.

He also released 2 remakes of the song: one, called "Alice -reprise-", and the other, "Alice (AIW ver)".

Retrieved from "https://vocaloid.fandom.com/wiki/Alice?oldid=873058"
Community content is available under CC-BY-SA unless otherwise noted.