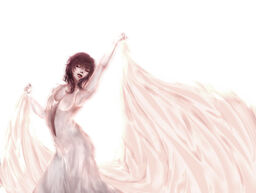 "Ancient Love" is a house-style song with celtic-influenced elements, sung by AVANNA. AdyS, the song's writer and producer, stated in the video description that "I was actually trying to achieve that celtic-paganic-dragon-fantasy feel with this song, but then I decided to put some modern futuristic electro bass because why not."

The song was originally released in Vocallective Records' album Christmas Cracker, published on December 20, 2013. It was uploaded to YouTube by Azureflux (the label's founder) ten days later, and was again uploaded to YouTube on January 18, 2014, this time on AdyS's channel with original art by Hidaomori.

The song was originally going to be called "Celtic Love".

Retrieved from "https://vocaloid.fandom.com/wiki/Ancient_Love?oldid=833467"
Community content is available under CC-BY-SA unless otherwise noted.