Anri Rune (杏梨ルネ) was a private Japanese VOCALOID developed for the VOCALOID3 engine.

Anri Rune was born on the 6th of August, 1990 in Tokyo and her blood type is A. Her strong point is smiling and her weak points are speaking smoothly and kanji. She has a qualification in 2nd rank kanji.

Rune's hobbies include playing the piano and a game known as Go. She also enjoys napping and walking about Nakano Broadway, basking in the sun. Her special skill is tongue twisters. She gets bad grades in Japanese class.

Anri Rune was introduced as a virtual announcer for Fuji TV on October 1, 2012. Tatsuya Egawa, a Japanese cartoonist made the first design. She hosted two TV programs but failed to earn viewing rates, so the company decided to retire her. At the Nico Nico Choukaigi (a party hosted by Niwango) on April 28, 2013, Rune made an announcement that she "was going to leave Fuji TV on June 30 and would start a new career as a Vocaloid".[2] She was unveiled at Voca Nico Night on July 27, 2013, with the song Hallelujah Super Idol by Kikuo with a totally new appearace.[3] The official release of the new concept by Kokudou 12-gou was in late December, 2013.[4]

On May 14, 2013, Rune was also adopted as a voicebank for Oto-Latte screen reader for iPhone developed by Sony. The Oto-Latte service ended on March 24, 2015.

In June 2014, Kikuo replied to a question and brought up that Rune's status is unknown.[5]

In January 2015, a user contacted YAMAHA about Rune's status and received a reply stating that Rune was never sold as a commercial product, which has been assumed she was never meant to sell commercially in the first place. Despite the email, some people were still confused if she would ever be sold.[6]

In May 2015, two users asked Fuji Television on the matter about if she would ever sell. Fuji TV replied that Rune was retired and would never sell any commercial products.[7]

Rune as she appears on Fuji TV

Anri Rune in Hallelujah Super Idol. Her MMD model is by Piron.

Rune as she appears in Hallelujah Super Idol 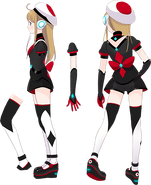 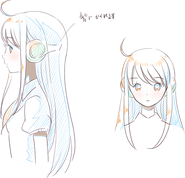