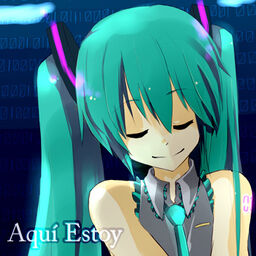 “In this song, Miku is a program which haven't been used during a a long while, and sings about her current state and longing wishes as Vocaloid.”
—Author's comment

Ankari's 3rd VOCALOID work and her most popular song. According the website, the song originally was composed to be a simply and quick work, taking the chance that Ankari's friend, the guitarist Fernando Vigueras went to rehearse. However the lack of lyrics and of someone that could play the electric guitar delayed the song. Eventually the guitarist 1B King offered to help with the song.

Retrieved from "https://vocaloid.fandom.com/wiki/Aqu%C3%AD_Estoy?oldid=946627"
Community content is available under CC-BY-SA unless otherwise noted.