B Who I Want 2 B is the ninth track featured Namie Amuro's album _genic. It is produced by SOPHIE, a London-based electronic music producer. An illustration was created by Shigenori Soejima, best known for his work on Persona 3 and Persona 4.

Following Namie Amuro's retirement on September 2018, this song has been made unavailable.[1] 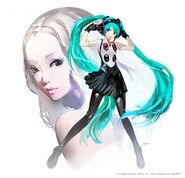 Screenshot with anagram of Hatsune Miku.

Retrieved from "https://vocaloid.fandom.com/wiki/B_Who_I_Want_2_B?oldid=1005335"
Community content is available under CC-BY-SA unless otherwise noted.