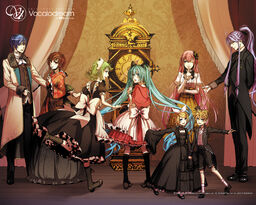 Reminder: Some minor details in this song or the video are not entirely canon to the stories, including the Bad ∞ End ∞ Night novels, and may contradict subsequent events featured in them.

“Now, let us begin. You are the star of Crazy nighT. The scene loops continuously until it reaches the True enD.”
—Author's comment

"Bad ∞ End ∞ Night" is an original song by teamOS and is one of their most notable songs. It was uploaded to YouTube on December 19, 2014. It's also Hitoshizuku-P's first work with GUMI, Luka, Gackpo, KAITO, and MEIKO.

The song focuses on the villager's (Miku) point of view. It concerns seven characters: the Boy Doll (Len), the Girl Doll (Rin), the Maid (GUMI), the Butler (Gackpo), the Daughter (Luka), the Lady of the House (MEIKO), and the Head of the House (KAITO). Finally, there's the Village Girl, and the Mysterious Shadow, who seems to be the audience of the play and possibly the one controlling it all.

The song begins with the Village Girl wandering deep in the woods, holding a letter. She is lost, but soon finds a mansion where everyone gathers to welcome her and decides the meeting calls for a party. Everyone's dressed up, getting drunk with celebration, dancing, singing, and having fun.

The Village Girl stays overnight because of the party, but when she wakes up, realizes something strange. The Dolls tell her to look at the grandfather clock; frozen at 4 minutes until midnight. The girl becomes scared and tries to hide, but instead discovers a secret room full of coffins.

The members of the house are surprised yet reassuring, asking her to stay as she's still the Lead of the play (Crazy ∞ nighT). That's when the script appears and they reveal how she must search for the key to the Happy EnD as it's all up to her. The Villager falls into desperation, searching for it, which she finds to be the clock's hands.

The Villager gets insane, and realizes that the key has to be used to kill everybody. The house's inhabitants flee, forgetting this scene's lines. If everything is destroyed, then the night should end, and they can all go home together… right?

Hand claps can be heard in the now calm and empty scenario: the grandfather clock's room. The Mysterious Shadow, who was watching the play, picks up the Villager's letter, left in the floor. "Tonight was a great show…" says, crying.

This has entered the Hall of Legend. It is featured in the albums Vocalodream, After the partY, EndlessroLL, and VOCALOID chouBEST -memories-.

Promotional artwork for the novel "Bad ∞ End ∞ Night" by Suzunosuke

Retrieved from "https://vocaloid.fandom.com/wiki/Bad_%E2%88%9E_End_%E2%88%9E_Night?oldid=951095"
Community content is available under CC-BY-SA unless otherwise noted.