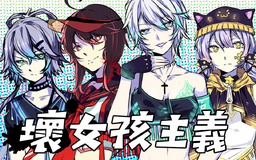 "Badgirlism" is an original song featuring Luo Tianyi, Yuezheng Ling, YANHE, and Xingchen. Its original debut was in the Dear: album. The PV version was readjusted and optimized compared to the album version. Zhanyin Lorra makes an appearance in the PV.

The song was deleted off of bilibili in July 2019 for unknown reasons.

The original version was featured in the Dear: album.

Retrieved from "https://vocaloid.fandom.com/wiki/Badgirlism?oldid=970341"
Community content is available under CC-BY-SA unless otherwise noted.