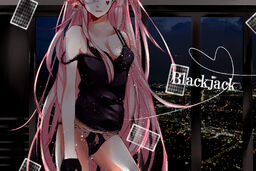 "Blackjack" is a song featuring Megurine Luka by Yucha-P. It is one of Yucha-P's most popular songs. It is the sister song to "Poker Face", is featured in the EXIT TUNES compilation album and Yucha-P's fourth album.

Retrieved from "https://vocaloid.fandom.com/wiki/Blackjack?oldid=1016171"
Community content is available under CC-BY-SA unless otherwise noted.