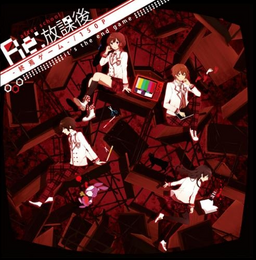 The Bookmark of Demise Project is a series that is based off of urban legends.

The manga adaptation for the Bookmark of Demise Project started on December 15, 2012 and is published monthly in Comic Gene .

Cover for the novel

Retrieved from "https://vocaloid.fandom.com/wiki/Bookmark_of_Demise_Project?oldid=1168250"
Community content is available under CC-BY-SA unless otherwise noted.