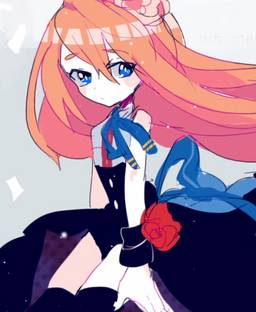 The song tells the story of a girl whose love left her without saying goodbye or promising to return. Over time, she learned that she'd have to just "carry on".

According to corasundae, the chorus was originally written for a fast rock song.

if anybody's listening,
then listen to me well
the chiming silver bells announce
the story I will tell

On a bustling street, you pulled me along
just as faint as the wind, you whistled a song
"what's wrong,"
so you asked and in turn I had said
"it's nothing"
that's not a lie

with the brush of a kiss
the touch of a hand
you don't promise a thing
or that you'll come back
and then, then you left, and you left
me with just those
two words:
"carry on"

the snowfall turns to rainy days
an arc across the sky
the seasons are forgetting you
and slowly, so do I

Hid away with you that cold September day
in your company, in your company, with nothing good to say
Then you stood up and would soon be on your way
You said something then, and it changed my life
those two words, what were they? ah

Even
now I feel an ache
somewhere in my chest
I thought time would over time have put it to rest
but it's only dulled
and the truth hasn't changed.
I loved you. It's not a lie.

with the brush of a kiss
the touch of a hand
you don't promise a thing
you'll never come back.
but somewhere inside,
those two words ring and I
remember.

Retrieved from "https://vocaloid.fandom.com/wiki/Carry?oldid=1007754"
Community content is available under CC-BY-SA unless otherwise noted.