"Catch the Wave" is a song featuring Hatsune Miku by kz. It was commissioned by SEGA to be the theme song for the video game Hatsune Miku -Project DIVA MEGA39’s-.

Game producer Makoto Osaki previously teased in a Famitsu interview that the theme song was by a producer whose been with the Project DIVA series for 10 years.[1]

The original upload was privated after it was discovered that the song in the upload was only 90% completed. The video was later reuploaded with the finished version.[2][3]

This song was featured in the Magical Mirai 2019 Tokyo, Day 1 and 3 concert.

Miku's Catch the Wave module for the song of the same name, designed by LAM. From the video game Hatsune Miku: Project DIVA Mega Mix. 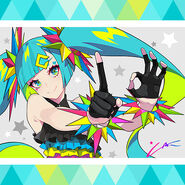