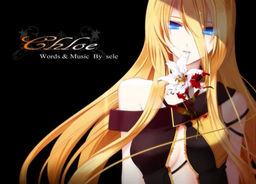 The song can be interpreted in many ways: one of the most popular interpretation's is that Lily's crush is dating another woman and she commits suicide. According to seleP, "Marie-Luise" is a sister song to Chloe. It is possible the song is also connected to seleP's others song using IA called "CARLA". This song is featured in the album Marie×Luise.

Retrieved from "https://vocaloid.fandom.com/wiki/Chloe?oldid=1033761"
Community content is available under CC-BY-SA unless otherwise noted.