Circle Jerk Galactic (converted to kana as サークル・ジャーク・ギャラクティック) is a compilation of electronic music by the circle Gunno-ne Sounds. Featuring the vocals of Hatsune Miku, Kagamine Rin, and Megurine Luka, the album was released at Comiket 85.

An official track listing is available on Studio Satuki, and an album crossfade has been uploaded to Niconico. The album can be purchased from Toranoana. 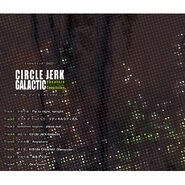 Back of album
Add a photo to this gallery
Retrieved from "https://vocaloid.fandom.com/wiki/Circle_Jerk_Galactic?oldid=319133"
Community content is available under CC-BY-SA unless otherwise noted.